Android is constantly evolving, every year we get new cool features and new awesome APIs added to the SDK. But backwards compatibility has always been an issue. Here’s the Android versions distribution at the time of writing: 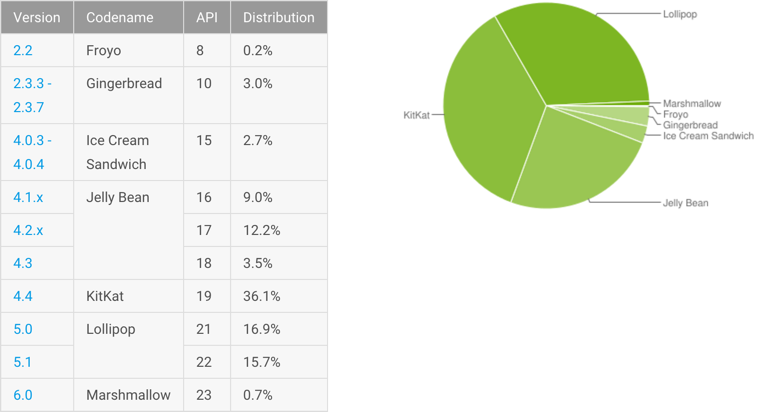 We’re in 2016 already, but KitKat, introduced in September 2013, is still the most popular system version with a whopping 36.1%. Two most recent versions, Lollipop and Marshmallow, are represented by a total of just above 30% of devices. It means that as a developer, you should at least support users with Jelly Bean if you want to target 90% of the market. So what does it mean in terms of APIs you can use?

Every new release comes with a set of new APIs, but there’s usually a bunch of old APIs that are being deprecated. Once in a while you’re trying to use a method and notice that Android Studio has crossed it out - it’s deprecated. Here’s a good example:

This surely looks familiar, but guess what? getColor(int) has been deprecated in SDK Level 23 and replaced with getColor(int, Theme). All right, let’s play dumb. The documentation says that the Theme argument may be null, so let’s try it out:

And looks like we’ve solved the problem just to create another one: the method we’re trying to use is only available since SDK Level 23 and will not work on older system versions. What do we do now? There is a solution to check which version of Android we’re running against by comparing the Build.VERSIONS.SDK_INT value to a specific version code in Build.VERSION_CODES, calling the new method if the version is high enough, and falling back to the deprecated method otherwise. In our case the code will look like this:

We’ve done our best, but the ugly strikethrough is still there… Is there a better way? Sure there is! Luckily, the Android team has provided a bunch of classes, usually postfixed with “Compat”, that are safe to call on most Android versions, and that hide away all the backwards compatibility mechanics.

Below you’ll find a quick survey of the most interesting, and probably the most helpful Compat classes that can be found in the compatibility library.

The best way to solve the problem outlined in the example above is to use the ContextCompat class:

We don’t have to worry about system versions checks, it’s all under the hood. A couple more useful methods in ContextCompat are:

Same story as with getColor(), the old method in Resources has been deprecated and replaced with a new one that requires a Theme argument. Just use the ContextCompat version and forget the trouble.

There were no runtime permissions before Android Marshmallow, so when called on an older system version, this method will return PackageManager.PERMISSION_GRANTED for any permission declared in Manifest.

This is an almost complete list of methods inside the ResourcesCompat class:

Those look quite similar to the methods in ContextCompat, but allow you to provide the Theme argument yourself. I’ve never stumbled upon a use-case for any of these methods, so can’t really say how helpful they are. Another odd detail is that getDrawable() and getDrawableForDensity() are static methods, while getColor() is an instance method.

A couple of methods from the ActivityCompat are:

We’ve already seen the checkSelfPermission() from ContextCompat, and this method is another part of the runtime permissions compatibility implementation. On Android versions prior to Marshmallow it will automatically grant the permission if it has been declared in the Manifest.

The flavor of startActivity() with the options parameter has been added in API 16, and options is typically a Bundle, returned by one of the methods in ActivityOptions class. ActivityOptions has a lot of cool methods to create custom Activity launch animations. The backwards compatible companion of ActivityOptions is ActivityOptionsCompat. Here’s how it could work:

Unfortunately, the animations themselves haven’t been ported to pre-JB, so those methods will have no effect on older system versions.

One pretty useful method in DrawableCompat is the following:

This will result in setTint() being called on Drawable on Lollipop and higher, and will fall back to setColorFilter() on older versions.

ViewCompat has a lot of wrappers to View class methods, introduced in Android Honeycomb and later, such as getX(), setX(), getY(), setY(), getAlpha(), setAlpha() and many more. Be careful though, most of the setters are just no-ops, and most getters return default values.

The MenuItem class has received a bunch of new methods since the Action Bar was introduced back in Honeycomb, and MenuItemCompat makes them fully backwards compatible, so you can achieve identical behavior on pre-Honeycomb versions as well. The most helpful methods in my opinion are the ones that help you deal with action views and action providers:

As you probably know, the default behavior of AsyncTask changed twice throughout the history of Android: it used serial execution (all tasks inside the application were executed on a single worker thread) in the beginning, then starting with Donut it switched to parallel execution, only to jump back to serial on Honeycomb. If you’d like to run your tasks in parallel on newer Android versions, use executeParallel(), or just call executeOnExecutor() instead of execute() directly on AsyncTask, passing in AsyncTask.THREAD_POOL_EXECUTOR as the parameter.

This was just a small selection from the complete collection of Compat classes, available in Android compatibility libraries, but those are probably the most used ones. But the rule of thumb is, when you stumble upon a deprecated method in the Android SDK - first dive into the docs for an explanation, and then look for relevant classes with Compat postfix! This is a pretty good way to stay on the safe side when dealing with backwards compatibility on Android. Cheers!