One of the features introduced in Android N is the possibility to select multiple languages in Settings (Language and Locale), which should enable the system to resolve app locales in a smarter way. Here’s how it works.

Imagine a person, whose native language is Italian, but who can speak German as well. The person is an owner of an Android smartphone running Android Marshmallow, and the device language is set to Italian. Now, the person downloads a simple “Hello World!” app, which supports two locales - English (primary) and German. Here’s how the app looks on her device:

Since the app does not provide resources in Italian, the system falls back to using the default locale, which is English. There’s no way for the system to know that our user understands German.

After some time, our user decides to upgrade to a new shiny Pixel smartphone powered by Android Nougat. She discovers the multiple language support feature in the Settings and sets up two languages, Italian (primary) and German. She installs “Hello World!” app on her new device:

A lot better! Now the device knows that one of the languages its user speaks is German, and it’s able to choose German as the app locale.

Now, suppose that we decided to make our simple app backward compatible to support older Android versions, and added the appcompat-v7 library to the Gradle setup. The user downloads the update, and what does she see?

Whoops! Looks like our app started showing texts in English, but why? Here’s what happened: appcompat-v7 contains resources for the Italian locale, and since all resources are merged at build time, our app now contains them too. The system sees the app as supporting user’s primary locale - which is Italian - and starts using corresponding resources. However, we haven’t provided an Italian translation for “Hello World!” string, so the system has no other way but to grab the string for the default locale, which is English! What do we do now?

Fortunately, there’s an easy solution provided by the Android Gradle plugin - the resConfigs method. This method allows us to pass in resource qualifiers, and the build will strip out resources in all folders that don’t match these qualifiers. Here’s what we have to add to our app/build.gradle file:

This tells Gradle that we’re only supporting two locales, en and de, so all other resources won’t be bundled into the APK.

As Amal Samally pointed out in the comments, a better way to achieve the same effect would be the following:

Advantage of this method is that you won’t need to update the configuration after adding translations to your application.

An easy way to verify that your build packages correct resource configurations is to analyze the APK. In Android Studio, navigate to Build -> Analyze APK… and select your app’s APK in the build folder. Here’s what we could see before adding resConfigs: 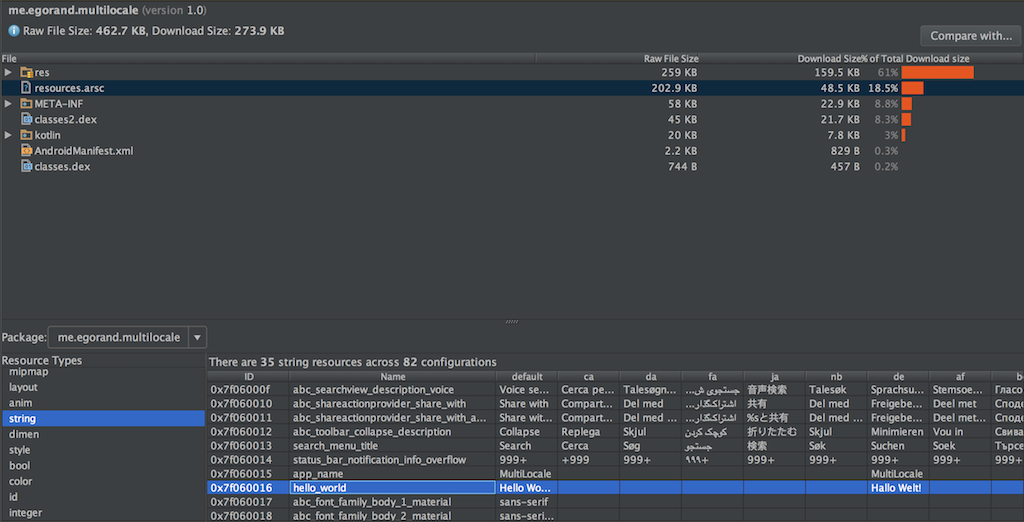 You can see that there are 82 resource configurations in total. After we add resConfigs and rebuild the APK, we see the following: 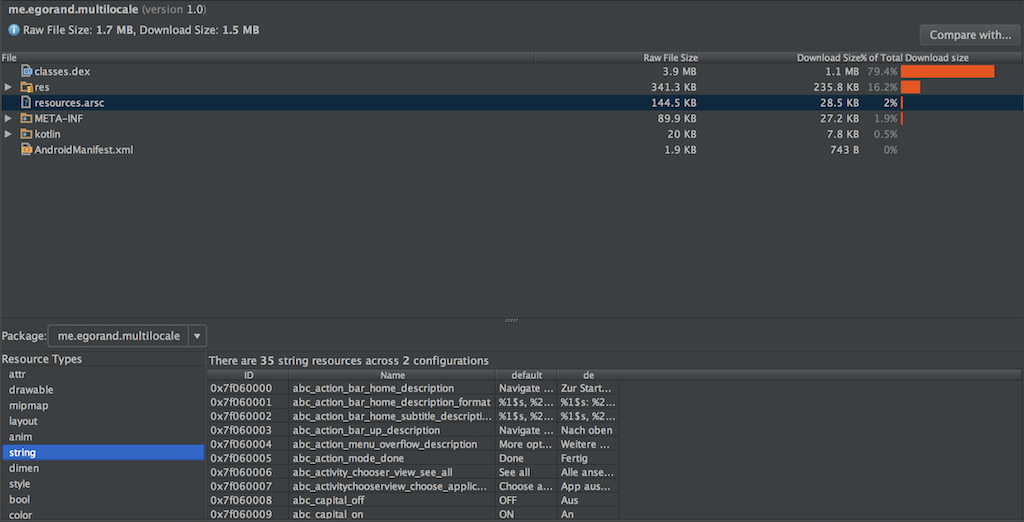 Now there are just 2 configurations, the ones we’ve explicitly specified.

Support for multiple languages is a great feature and it will certainly improve the experience for bilingual users. However, if you’re not careful with resource configurations that your app packages - and those are not only the ones your app provides but all resources coming from all AAR libraries you use - your users won’t be able to benefit from improved locale resolution. If your app uses appcompat-v7, consider using resConfigs to work around this problem.